US researchers create transistor which could dramatically improve computer technology. 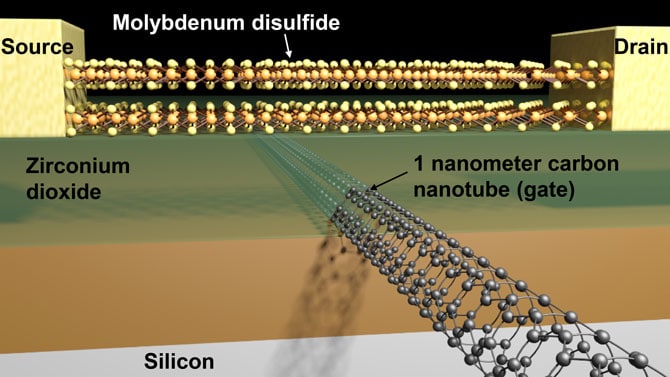 US researchers have created a transistor so small it could extend the limits of Moore’s Law, changing the face of computer technology and the capacity of data storage as we know it.

Research by the Department of Energy’s Lawrence Berkeley National Laboratory (Berkeley Lab) has led to the creation of the smallest transistor to date – a 1-nanometer functional transistor gate which is 50,000 times smaller than a single strand of hair.

Improvements in conventional transistor materials over the past several decades has been sufficient to sustain Moore’s Law.

However chipmakers are now concerned that they might soon reach the fundamental limits of conventional materials, resulting in the break down of Moore’s Law preventing future circuits from becoming smaller and more powerful than their predecessors.

This is why researchers such as the Berkeley Lab team are searching for new materials that can compute in smaller spaces, primarily by taking advantage of the additional degrees of freedom that the materials offer.

Lead researcher of the project, Jie Yao said this process would be useful for concurrently accessing both the usual electronic and valleytronic degrees of freedom, which would substantially increase the computing power and data storage density of circuits made with the material.

“We show a new material with distinctive energy valleys that can be directly identified and separately controlled, ” he said.

“This is important because it provides us a platform to understand how valley signatures are carried by electrons and how information can be easily stored and processed between the valleys, which are of both scientific and engineering significance.”

Transistors are semiconductors which work as the integral building blocks of modern computer hardware, with smaller transistors such as the one created by Berkeley Lab team playing an important part in improving computer technology.

This 1-nanometer-gate transistor gate is such an important creation, due to the fact that current transistors are 14nm scale technology.

Lead scientist of the Berkeley Lab team Ali Javey said this first of its kind transistor creation showed that electronics can still be shrunk dramatically.

“We made the smallest transistor reported to date,” he said.

“The gate length is considered  defining dimension of the transistor, showing that with the choice of proper materials, there is a lot more room to shrink our electronics.”

According to first author of the research paper Shuren Lin, the material used to create the new transistor is different from previously investigated candidate valleytronics materials because it possesses such selectivity at room temperature without additional biases apart from the excitation light source, which alleviates the previously stringent requirements in controlling the valleys.

Compared to its predecessors, sulfide (SnS) is also much easier to process.

With this finding, researchers will be able to develop operational valleytronic devices, which may one day be integrated into electronic circuits.

The unique coupling between light and valleys in this new material may also pave the way toward future hybrid electronic/photonic chips.

Electrons flowing through SnS are heavier, making them easier to control even at smaller gate sizes, with SnS more capable of storing energy in an electric field.

Founded in 1931, Berkley Lab’s scientific expertise has been recognised with 13 Nobel Prizes.

Its objective is to build close partnerships with industry to accelerate the time it typically takes to move from the discovery of a technology to its scale-up and commercialization.