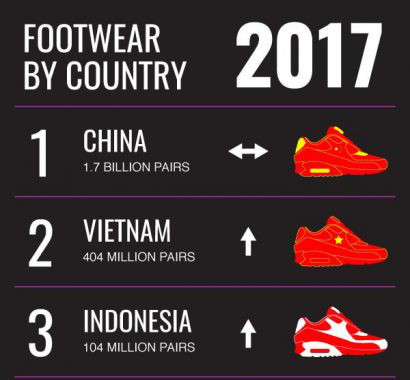 China is a manufacturing powerhouse but there is one industry where it may be gradually losing its dominance.

China is continuing to lose its share in global footwear production, falling to a 20 year low of its imports to the U.S in 2017.

China saw a 4.31% drop in the dollar value of its footwear imports to the U.S for the year 2017,in contrast with a 0.36% drop in worldwide sales by U.S footwear manufacturers.

China’s share in world footwear production, which had increased during the last few decades, peaking in 2013 at 62.9%, has since steadily declined to 57% in 2016.

While China’s worldwide footwear production continues to decline, other Asian countries have seen their production rise in terms of footwear imports to the U.S.

Vietnam, Indonesia, Cambodia and Thailand all saw rises in their overall production and revenue of U.S imports in 2017, as all four occupied places in the top 10 of the Footwear Distributors and Retailers of America’s (FDRA) Footwear Production Power Rankings.

India was another Asian nation to occupy the top 10 of the Power Rankings, which also included Mexico, Italy, Brazil and the Dominican Republic.

China’s steady decline in its overall share in worldwide footwear production correlates with an overall stall in sales of the global footwear industry.

According to the 2017 World Footwear Yearbook, the worldwide production of footwear stalled at 23 billion pairs in the last two years, after climbing 15% between 2010 and 2014.

China still remains the dominant supplier of more than 71% share of U.S footwear imports, but according to data from the U.S Department of Commerce, FDRA said imports China have reached a 20-year low and shipments have seen declines in the last seven of ten years.

According to the FDRA, it is Cambodia which rivals China as a key low-cost supplier.

The FDRA Footwear Production Power Rankings highlighted the growth of Vietnam and Indonesia, with the former having 17 straight years of impressive growth in shipments to the U.S and a record 17% U.S import share in 2017, and the latter having 10 straight years of gains with record U.S shipments in 2017 and its highest U.S import share in 18 years (4.4%).

With China, Vietnam, Indonesia, Cambodia, India and Thailand all featuring in the top 10 of the FDRA Footwear Production Power Rankings, Asia’s share of the world production was 86.7% in 2016.

But while the continent remains a footwear production powerhouse, according to the 2017 World Footwear Yearbook, Asia has lost 2 percentage points in its share of world exports since 2010, while Europe has gained 3 percentage points during the same period.