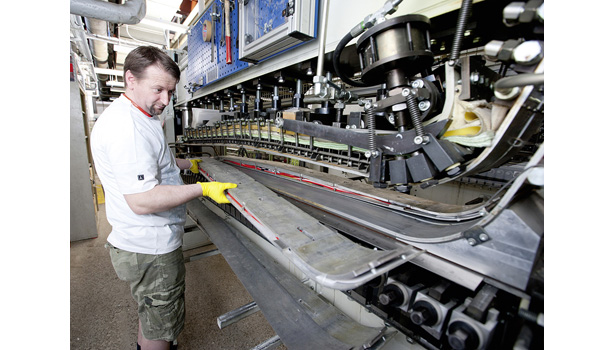 Advancements in technology have made a significant impact on numerous industries, and that is certainly the case where sportswear and equipment is concerned.

The value of the sector continues to rise, with analysts predicting that it could be worth around $400 billion worldwide by 2025.

Spending on sports gear is firmly established in countries such as the United States, but the likes of China and India represent a massive opportunity for manufacturers.

Tech has revolutionised the way companies in the sector do business, with tools such as Katana MRP enabling them to practice lean manufacturing along their production routes.

This places emphasis on reducing manufacturing waste while delivering quality products on time, at the most economical rate, and with greater efficiency.

Read on as we look at some of the ways that tech is being used to create sportswear and equipment that makes a real difference to athletic performance.

The manufacture of soccer cleats is an ever-evolving medium, with the leading brands eager to push the boundaries of tech wherever possible.

As one of the main suppliers to professional football, Nike continually strives to produce footwear that gives the sport’s top stars an edge on the field.

During the early part of 2020, they released a prototype of a soccer cleat that was the first in football to feature Flyprint technology.

The upper of the Nike Air Zoom Mercurial soccer cleat was produced through solid deposit modelling, a process where a TPU filament is unwound from a coil, melted, and laid down in layers.

An advantage of 3D textiles over traditional 2D fabrics is increased dynamism, with the Flyprint upper being more lighter and breathable than previous cleats.

The tech could be used to make fully modular boots in the future, allowing players to completely tailor their footwear to their individual requirements.

Tech Pushing the Envelope in Cycling

Cycling has historically been a sport where riders and teams have sought to leverage the latest tech to their advantage.

That point was perfectly highlighted by Chris Boardman, as he raced to victory aboard the space-age Lotus 108 in the 4,000m pursuit at the Barcelona Olympics in 1992.

That laid the foundations for carbon fibre technology to become commonplace in cycling, with firms such as Toray, Time, and BMC leading the charge.

CNC machining and 3D printing are amongst the processes used in the manufacturing of bikes, with the latter already making its mark at the top level.

Tech also plays its part in the manufacture of cycling clothing, with synthetic composites such as polyamide and elastin used to increase the performance of fabrics.

Technology has radically changed the way golf is played, with modern equipment allowing players to hit the ball much further.

Companies such as TaylorMade, Titleist, Mizuno, and Callaway have been at the forefront of transforming the sport, creating an industry that is now worth more than $8 billion.

While the game’s rulers remain resistant to change, the manufacturers continue to attempt to eke out improved performance wherever possible.

For instance, almost every driver on the market now has moveable weight plates that allow players to shift the centre of balance in their club.

Callaway’s Mavrik driver was designed using Artificial Intelligence to filter 15,000 iterations of the clubface to select the best performing version.

Krone Golf is another company that has sought to give its clients an advantage, using CNC machining, 3D printing, and additive manufacturing to create customised clubs.