Importance of who, what, when, where, why & how (5W1H) in press releases

When writing a press release, it is important to ensure the information is displayed in a clear, concise manner.

It’s good practice to include this information as early in your press release as possible, and to have a title that holds some of these variables as well. Below is a good example of a press release for an event. 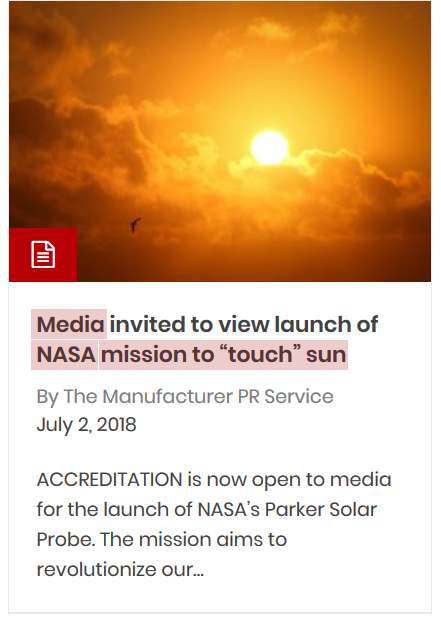 The image above shows an example of an event press release with three points of information in the title. It shows that the media are invited (who) by NASA (who) to view the launch for the mission to “touch” the sun (what). This gives journalists a clear idea of what the press release is about, in just 11 words.

Above, multiple instances of who, what, where, when, how and why have been highlighted to show the prominence of these descriptors in a good press release. Journalists may read dozens of press releases a day, and it is important to ensure these factors are clearly prominent in your article, to make sure they can be picked up easily during a skim read.

Try to keep press releases to a reasonable length, and only include information relevant to the story. While it may be tempting to write a lot about your business, it’s best to hold off, and only include what is relevant. If you would like to include additional information about your company or organisation, do so at the end of the article under an “About [insert business]” heading. You can also hyperlink your business’ name early in the article with a link to the company website. Both of these methods allow for journalists to learn more about the company if they wish to do so.

Finally, try to include a relevant photograph that you have permission to use. As the saying goes, a picture’s worth 1000 words, and an interesting photo can help to catch the eye of those who see you press release, which may lead to more attention and readers.

For more tips on Press Release writing visit our page: How to write a great press release.